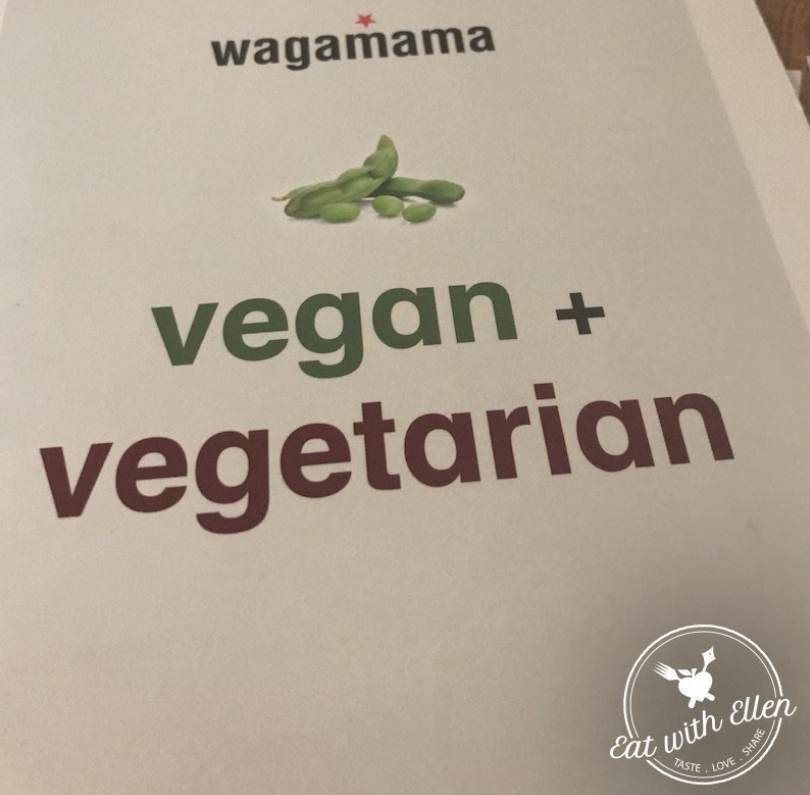 Anyone who tells me will tell you that I love meat. I’m a carnivore through and through. Yes, I recognise the issues with that but I’m not going to turn this into an ethical or political conversation. It’s merely the backdrop for what is about to follow. Which is me going vegan for a night.

Yep, you read it right. The guys at Regent Court in Leamington, who you might remember I’ve worked with in the past, asked me if I fancied going along to Wagamama to try their vegan menu. I’ve only been to Wagamama once before but had a decent lunch there, and of all cuisine to do without meat I reckon Asian-inspired food could be the most manageable.

Wagamama in Leamington is a juxtaposition of old and new. It may be housed in the former ballroom of the Old Regent Hotel, complete with ornate high ceiling and elaborate coving, but the bench tables are the same you see in some of the more modern settings for the chain. Don’t worry, if you don’t like sharing a bench with other people and feel it’s a bit too reminiscent of school dinners then there are plenty of more traditional tables.

Despite it being a Tuesday, the restaurant was packed. To Mr M’s delight we were led to one of these separate tables and settled with our menus – ordinary for him and the dedicated vegan and vegetarian menu for me. Having adopted my vegan mantle for the night, I have to say it was quite nice having my own menu and knowing that everything on it was up for grabs – right down to the specifically-selected wines – rather than having to comb through and analyse some kind of crazy code system to work out what I could eat.

Of course, there are vegan and vegetarian options included on the normal menu, but I think the idea of your own dedicated selection is quite nice and probably helps with the feeling that Wagamama’s actually making an effort when it comes to this growing section of diners. Quite wise too, given that there are now 3.5 million British people who identify themselves as vegan according to a survey by comparethemarket.com earlier this year.

I have to say, I was quite impressed by the selection I had in my special menu. Okay, not all of it got the taste buds going in the same way the meat-filled dishes might have done, but there was enough to keep me studying the menu far longer than the 30 seconds I had imagined it would. In fact, I was still trying to decide what to have when I was halfway down my pint of vegan-friendly Asahi (yes, I didn’t even realise some beers were vegan-friendly and others weren’t).

If you haven’t been to Wagamama before, they don’t really do starters. On the normal main menu there’s an array of Asian-inspired dishes, from Gyoza to ramen, teppanyaki, salads, curry. There are also what they call ‘sides’ which you can have as sharing dishes or to accompany your main. Food comes as it’s cooked – hence the lack of ‘starters’. Personally I think the idea of eating when stuff is cooked and not when it’s sat on a hot plate waiting for another dish to be finished off but if you like everything to come together it’s possibly not the best place for you.

The first thing to come was Mr M’s non-vegan pick of tama squid from the sides menu. Fried balls of finely chopped squid with  – crispy fried squid balls, drizzled with okonomiyaki sauce (which is apparently basically ketchup, Worcestershire sauce, oyster sauce and sugar) and mayonnaise, as well as some dried seaweed flakes.

The balls were crispy and the light batter they were in didn’t overwhelm the squid, while the sauces were a welcome addition to the flavour and the flakes an extra crunch in texture terms. My only criticism was that despite the whole ‘dishes comes when they’re ready thing’, our squid was a bit on the cool side. I would have liked to try it when it was still piping hot and with that fresh crispiness that you’d expect from the description.

Next up was my vegan main course. There’s a fairly impressive selection of vegan choices on the menu, from ‘vegatsu’ – a vegan katsu, obvs – to a vegan version of curry, ramen, noodle dishes and salad and my choice, yasai pad thai. I do like a pad thai and figured I could do without any non-vegan additions and it still be nice. Plus this one had the addition of tofu and although I’ve never been convinced by it before I was willing to give it another go.

I can tell you a few things about a vegan pad thai and please bear in mind that I’m no expert when it comes to Asian food. You need my big brothers for that. These are just my own thoughts. First, when someone takes the egg out of pad thai, you won’t necessarily miss it. I didn’t anyway. Secondly, tofu doesn’t really bring much to a pad thai. Well, it does of course. It brings chunks of something. But in terms of actually adding something to make you think, ‘ooh I’d order that again just for the tofu in it’, no.

Don’t get me wrong. It was an enjoyable dish – soft rice noodles, a bit of bite from leeks and beansprouts and fried shallots, heat from chilli, tang from lime, crunch from peanuts, and some fragrances from coriander and mint. Okay, it didn’t blow me away and make every other pad thai I’ve had pale into comparison, but it was nice. The tofu just didn’t add anything and I’d happily have done without.

Refusing to embrace the vegan life, Mr M opted for the ‘firecracker’ off the main menu’s list of curries. A pretty-looking plate of prawns with mange tout, red and green peppers, onions and red chillies around a pile of white rice and sprinkled with sesame seeds. As the name suggests, it’s fiery courtesy of the chilli and was apparently tasty and fresh, though Mr M would have liked a bit more sauce to make it feel more like a curry than a stir fry.

We added a side of wok fried greens – always a hit with me – and eagerly awaited the final part of our feast, some steamed buns. I love these and we were particularly spoiled a few months ago when we had some from Wallace & Sons at Canteen in Leicester a few months ago, so we decided to use them as a bit of an experiment at Wagamama. Mr M ordered from the normal menu – Korean barbecue beef with red onion – while I went vegan, choosing some bao filled with mixed mushroom and panko aubergine, with any mayonnaise removed to make it vegan-friendly.

The steamed buns weren’t half bad. Not quite up to the standard of bao from Wallace & Sons, but enjoyable and rather moreish. Our experiment showed that when it comes to some dishes, you really don’t miss out by having the vegan version. While Jamie’s korean barbecue beef filling brought all the richness you’d expect, my mushrooms were pretty meaty and I didn’t miss the mayonnaise.

The dessert list at Wagamama is fairly extensive, though I was sad to see if you’re vegan you don’t get all the most appealing ones. Think it might be a deal-breaker for me if I was ever considering full-time veganism. Mr M opted for chocolate and shichimi ice cream which came with chocolate sauce and caramelised sesame seeds and a warning that it packs a punch. Think the winning combo of chocolate and chilli, but heavier on the chilli than you’re usually used to, and that’s about it. Pretty yummy in fact, albeit slightly unusual.

My vegan options were lemongrass and lime sorbet or pink guava and passionfruit sorbet with fresh mint so I opted for the latter in search of something slightly sweeter. I was pleasantly surprised, though I’d have much preferred a non-vegan yuzu and lemon tart or a coconut and fig cheesecake. Or even a spice mango and coconut parfait or chocolate layer cake. Yep, perhaps going vegan isn’t for me.

Despite my inability to embrace vegan desserts, we left Wagamama contented and likely to return. As a vegan imposter, I was impressed by the choice you can still have and the fact it really does seem like some thought has gone into accommodating people who want to embrace the vegan life. Without having made that jump myself, I guess vegan dishes would always struggle to replace their non-vegan relatives for me, but I enjoyed everything I had and was quite tempted by a few of the other main courses. I’d also happily go vegan when it comes to steamed buns if those were anything to go by.

As for Wagamama in general, I can see why it’s so popular. Yes, I’m sure there’s a school of thought out there that will argue that the chain isn’t entirely authentic and some of the dishes aren’t true to their origins. But much like my views on Yo! Sushi, I think we need to accept that sometimes there’s no harm in making a particular cuisine more accessible, whether that’s in terms of price, ambience, or by making it just that bit more mainstream. It gets people through the door, it gets them eating out together, and it may well lead to them experimenting more with Asian food.

So no, I can’t see myself going vegan just yet, despite being aware of the ethical arguments. However, some of the dishes at Wagamama have served to remind me that perhaps I should consider the non-meat options when I’m looking at a menu. And if they don’t appeal, I know there’s plenty left on that menu that I wouldn’t mind trying.

We were invited to try the vegan menu at Wagamama in Leamington Spa. Our meal was complimentary.